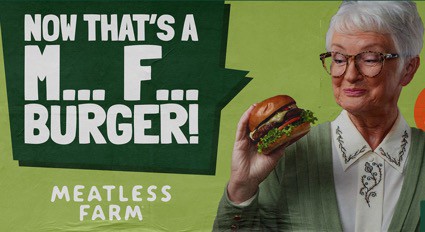 Quorn has been around since 1985, producing a meat substitute made from a fungus found growing in Buckinghamshire in its bid to help reduce reliance on animal protein to feed the world.

Fast-forward to 2020, and Britain’s Leeds-based Meatless Farm stirred things up with its attention-grabbing ‘Now, that’s a M…. F…. Burger!’ images. ”We wanted to communicate to meat-eaters that there is no compromise on taste, texture or price when going M*** F***.  Simply swapping once a week can make an astonishing impact on our environment and people’s well-being,” said Michael Hunter, Chief Growth Officer at Meatless Farm.

The brand also put out a very different kind of campaign challenging the public to become BBQ (barbecue) warriors by using its plant-based products instead of traditional animal meat.

What kind of BBQ Warrior are you? 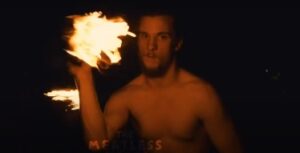 By positioning barbie fans as activists, and through effective visual references in the video campaign, Meatless Farm reflects the ongoing devastation to the environment caused by over-consumption of meat.

This report by international NGO Global Witness chronicles the killings of environmental defenders. Global Witness “works to break the links between natural resource exploitation, conflict, poverty, corruption, and human rights abuses worldwide”. Deforestation and harmful livestock-farming techniques have developed to feed huge demand for burgers and other meat products that would previously have been luxuries rather than everyday eating.

As awareness of the need for better individual and planet health choices grows, lab-created meat options by the likes of Beyond Meat, P.L.T. and Impossible Foods are gaining in popularity and market share, even taking their place on fast food menus like Burger King and McDonalds.

US rapper and media personality Snoop Dogg surprised customers at a Dunkin’ drive-through in Los Angeles by serving up meat-free Beyond Meat sausage sandwiches in this 30-second campaign. Dunkin’ says that it brought in the “biggest Beyond Meat fan” they know, and dubbed him Employee of the Month for his efforts.

Meantime, Italian-American restaurant chain Frankie & Benny’s deployed US rock icon Meat Loaf earlier this year to promote their vegan option with a play on famous lyrics: fans will know Meat Loaf “won’t do that”, but the question has always been, What is ‘that’? (Watch the 1’40” clip to find out!)

So, whether you’re a carnivore wanting to cut back, a vegetarian or vegan looking for fresh flavours to tickle the taste buds, or simple a curious foodie, the meat-free products are looking good, right?

Now the debate arises as to their health value – after all, they are highly processed foods, and many hold that the closer we can eat to ‘whole’ unprocessed foods, the healthier we will be. Meat-free is not the same as fake meat.

Critics argue that although such products are sold under the banner of ‘plant-based’ (often pea or soy), they are laboratory creations whose ingredients are manipulated to an extent that makes them highly questionable in the health stakes.

Environmentally, though the fake meat companies have cleaned up their packaging to the extent of no longer wrapping the treats in single-use plastic, as Quorn did in the early days, detractors points out that the mass production and intensive farming of the base ingredients still goes against the regenerative farming methods needed to help heal the planet and achieve sustainability alongside improved global health outcomes. 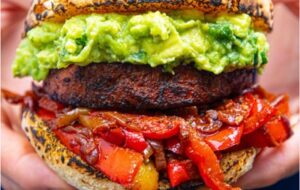 They may look good, but a widespread feeling among health experts and fitness buffs appears to be: there are pros and cons, so use fake meat options very sparingly in your diet.

A bit like what Grandma used to say about meat itself, in fact…